Who says Wing Chun has no kicking? 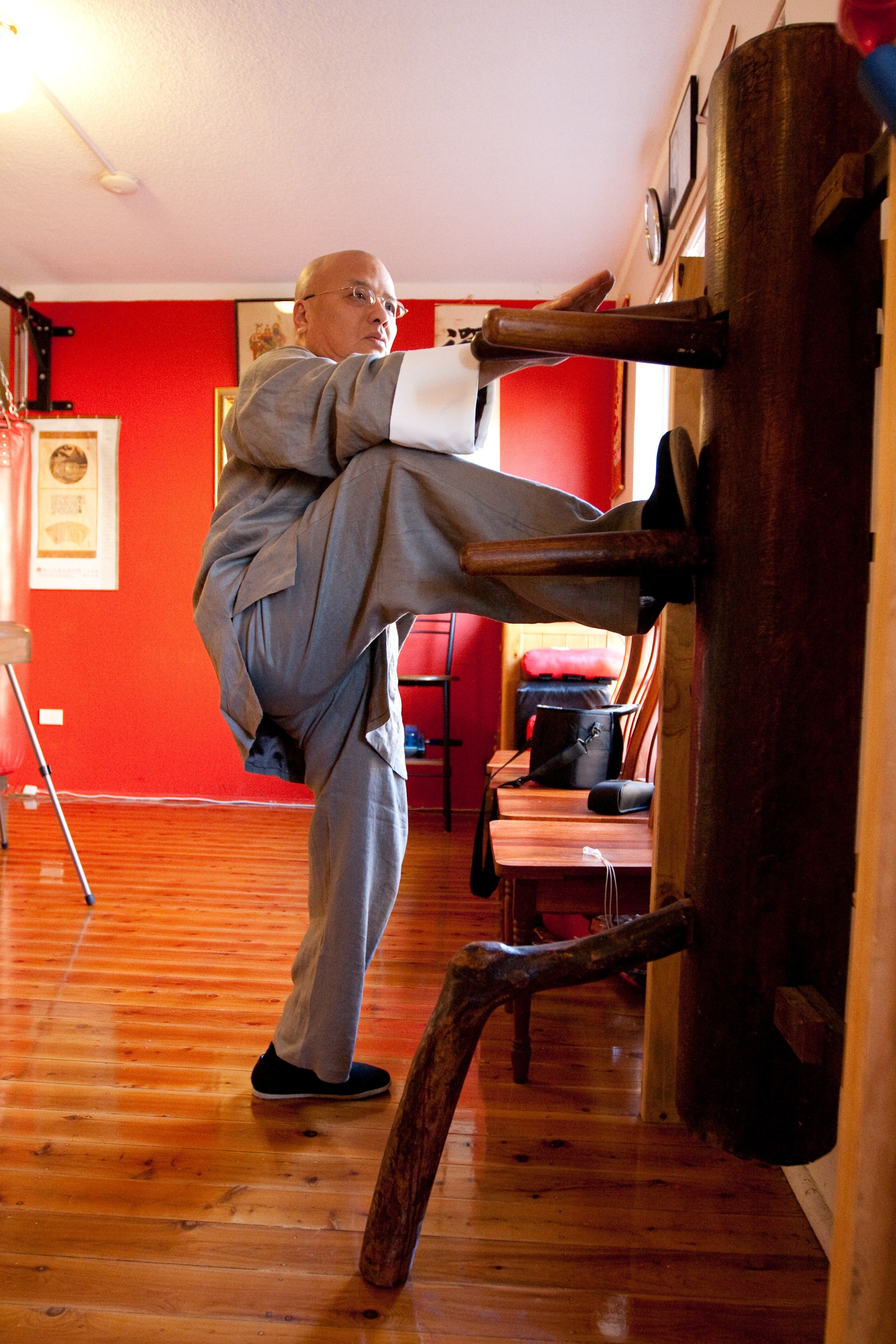 While classified as a Southern style, Wing Chun does not fit neatly into this categorisation. Alongside other martial arts created in the last 300 years, Wing Chun uses a medium height stance for the flexibility of both fist and kicking techniques. While the fist techniques of Wing Chun are well known throughout the world, inside the often underlooked kicking techniques is in fact, a jewel of the Wing Chun system.

There are eight kicks and thirteen ways of Wing Chun kicking. Passed down by Grandmaster Mr. Yip Man to Sifu Derek Fung in the 1950s, all of these are found within the wooden dummy form. The major eight kicks include:

Wing Chun kicks are characteristically known as 無影腳 (mou4 ying2 goek3), shadowless kicking. This means the kicks are non telegraphic, to be delivered without any visible warning, striking at lightning speed before the opponent has had time to react. A famed skill in Chinese folklore, it is very difficult to achieve, but based in sound principles and much hard training.

The Single Leg Stance is the foundation for all kicking techniques. It cannot be stressed enough that the emphasis of kicking training is on the Stance of the non-kicking leg. This includes developing Torsion, Counteracting, Loose, and Coming Straight Back into Structure. Without these, there is no kicking power, nor aliveness in your kicking.

Kicks must be delivered rapidly and without movement in body including the head, shoulders, trunk, and supporting leg. This demands a strong foundation in your Single Leg Stance and a supple, smooth movement in the kicking leg.

Kicks should be delivered tightly and quickly in an instant. When kicking, your supporting leg is on the ground. Being able to kick at will demands that your footwork is agile.

Wing Chun uses kicks to deal with kicks, and not arms. This is for a number of reasons.

i. Humans have two arms and two legs. Using arms to deal with kicks can leave your arms occupied and vulnerable to follow up fist techniques.

ii. The maximum reach of the arms extend in a circle around the shoulder as a centre. Kicks are easily aimed at the lower sections of the body, where your arms cannot reach (unless you kneel). Where you cannot reach, you cannot protect.

iii. Legs are longer in reach and naturally more powerful than the arms. It is a clear disadvantage to use arms to deal with kicks, particularly against a larger and stronger opponent.

To be able to use kicks, your legs must be able to look after your own space, and your eyes must see this space. For your torso, your left hand looks after the left side, and the right hand looks after the right side. However with your legs, a single leg must look after both sides. This is why training your Single Leg Stance is so important. To be able to look after both sides, your peripheral vision must extend all the way down to the space in front of your feet. When this is developed and you are intimately familiar with your own space, like a seasoned army defending its homeland, no one can enter it without suffering damage.

Understanding these principles is important; but intellectual knowledge without practice is not only useless, but dangerous. Sifu Derek Fung personally insists on training kicking daily, suggesting his students to work up to at least twenty five thousand repetitions to naturally create kicking power 腳法動力 (goek3 faat3 dung6 lik6). Even though he is in his mid seventies he continues to lead by example, training together with his students more than five hundred kicks a day. In the remaining half of this year (2014), he aims at reaching one hundred thousand repetitions himself! This is a true testament to his personal work ethic and attitude towards training – that no matter your level, there is always room for further improvement and development.

After one particularly difficult training session, Sifu reminded us of a training phrase.

Sifu Derek Fung has never openly taught kicking in public until now. Now with over sixty years of Wing Chun experience, he is detailing the incredible kicking techniques of Wing Chun as passed down by Grandmaster Mr. Yip Man. Sifu encourages us to ask any questions we have, generously explaining and demonstrating his knowledge. As his student, I am humbled to share in his knowledge and experience, and to be shown once again that kung fu (功夫) truly means hard work.

Did you enjoy reading this article? What other topics would you like us to write about?
Let us know in the comments below!

Sifu Derek Fung is offering an opportunity for a select number of new students to join his school. Find out more here.